On Monday I bought my car.  I wrote a funny column about it for The City Paper, but my more...intense thoughts were on this blog.  I'll have more about intense thoughts in the next few days, but for now, I want to let you know some new facts about the car.

1.  I drove it to Greensboro, NC, over the last two days.  Yes, I drove most of the time!  I discovered that my interstate skills hadn't disappeared at all.  I was perfectly capable of changing lanes, using cruise control, slamming my foot on the brake if need be.  As I drove, I had some of the freedom thoughts I wrote about before:  I considered how difficult it would be to put Maybelle into her carseat with her Haley and head off to Greensboro again to visit both my brothers.  Could I do it solo?  I think so!  We might spend a couple of summer weekends with the North Carolina Piepmeier Miller cohort. 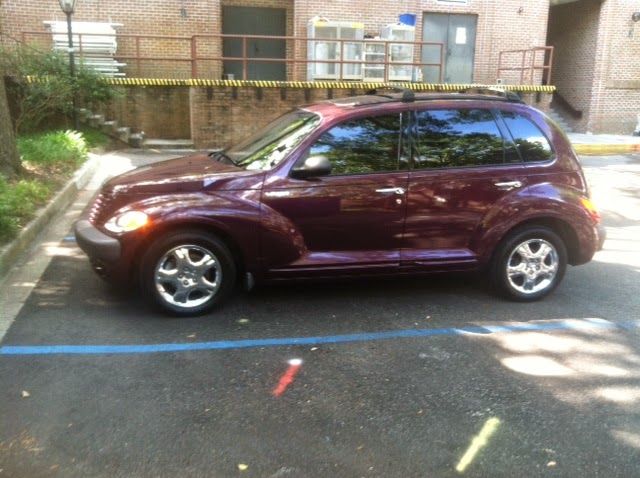 2.  When I first wrote about the car, Erica brilliantly named it The Eggplant.  Totally appropriate:  the car is an eggplanty purple, and it's almost completely rounded, no corners.  Plus, I enjoy eggplants. Who doesn't love eggplant parmigiana?

Then Trey met the car, a car about which he'd been a little...skeptical.  He found it acceptable.  And because he has a sort of odd, perfect sense of humor, he started calling The Turnip.  You know, because it's not at all like a turnip.

But it turns out that the car actually prefers that name.  The Turnip captures its personality.  It feels it's more appropriate.  So that's its name now.  As I drove back to Charleston, I offered it several pats on the dashboard and said, "Good job, Turnip."
Posted by Alison Piepmeier at 2:59 PM