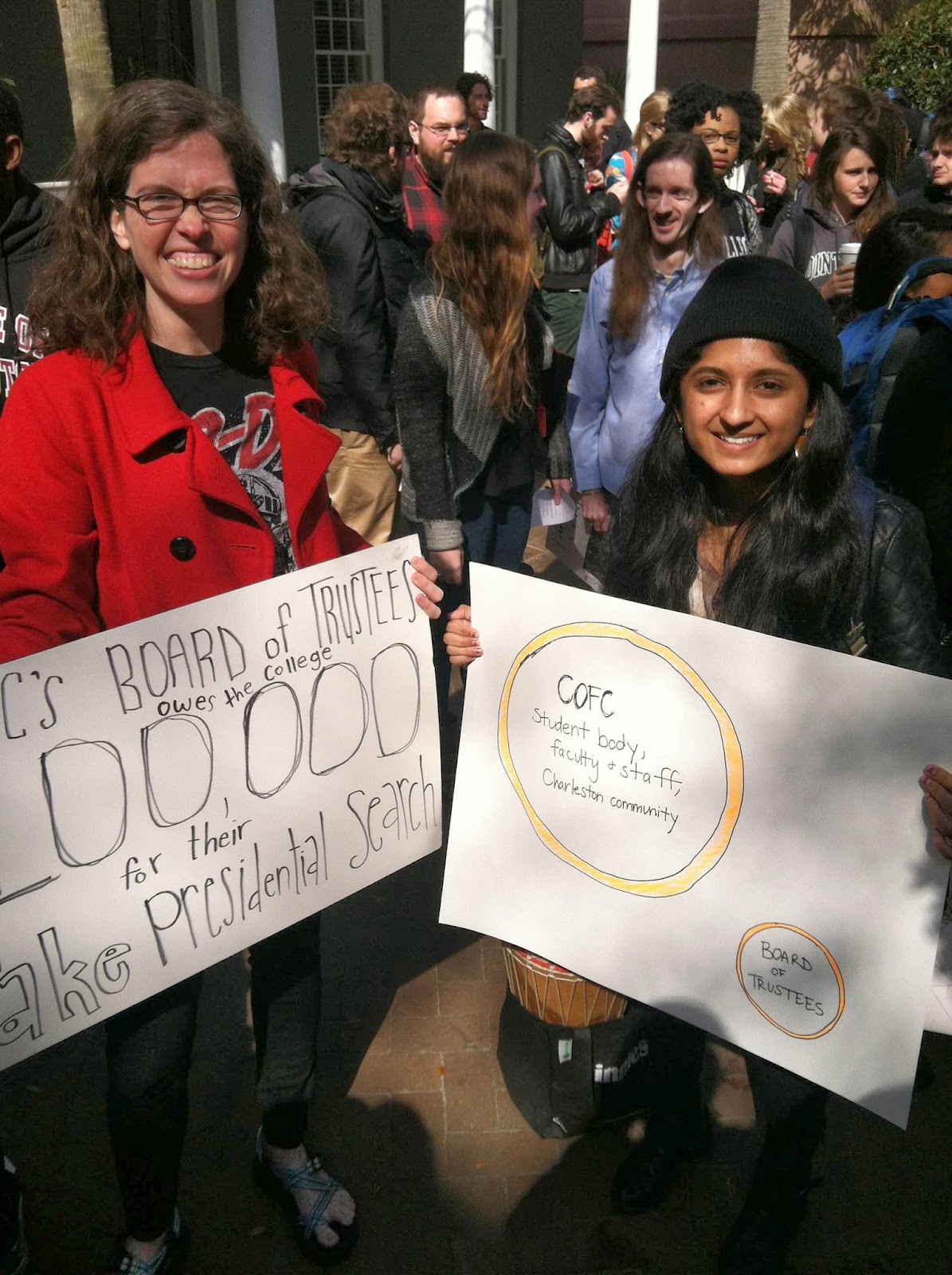 I was proud to be a member of the College of Charleston community today.  I hope the Board of Trustees heard us.
Posted by Alison Piepmeier at 8:10 PM 1 comment:

We're going to hell in a handbasket.

I can't decide if I find this hard to believe or if it's what I expected.  Glenn McConnell is the new President of the College of Charleston.

The place where I teach.  The school that I love.

McConnell is an advocate of the Confederacy.  He owns (owned?) a shop selling all kinds of Confederate goods.  Grace, a student who used to work for WGS, had done some high school work at McConnell's shop.  She said he was a nice guy, but WOW did he love the Confederacy.

Are you aware the Confederacy started a war to maintain their right to own human beings?

Are you aware flying the Confederate flag did not come back into fashion until segregationists took up the symbol in their fight against Civil Rights in the 1950s and 1960s?

Are you aware that championing a cause and defending a symbol long, and deliberately, associated with hatred, intolerance, oppression, and racism could imply that a person holds those beliefs as well?

Here he is, the President of the College of Charleston.

This is the man who told me, when I asked, that when the SC legislature accused CofC of promoting "a gay and lesbian lifestyle" and offering "obscene pornographic mandatory" reading, the president should have said, "Thank you" and gone back to CofC.

I'm not sure what to do here.  This is the man I will work for starting July 1.
Posted by Alison Piepmeier at 7:42 PM 30 comments:

Exploring my own disability. And my own ego.

I'm giving an invited lecture for Women's History Month this afternoon at Coastal Carolina University, a school a few hours away from Charleston. I'm really happy to have been invited, and I'm looking forward to my talk on zines and contemporary feminism--zines are so cool, and I'll get to show a lot of them and invite the audience to help me dig into them and consider their significance.

So I'm doing a fun and sort of prestigious thing:  keynote lecture.  And that's paired with something I've never done before, that I'm feeling torn about:  I'm riding a Greyhound bus to get there.

The seizures are a result of the brain tumor and the surgery to remove the tumor.  They can actually be a sign that things are going well:  when anything changes in the brain--like the tumor shrinks--more seizures can be triggered.  But seizures suck.  I don't have any memory of the big ones--the seizure wipes out my memories from several minutes before--so my memories there are typically waking up in an ambulance and thinking, "Oh, fuck."  I haven't had a big seizure since April 9, 2013, so I'm coming up on my first anniversary.

But I have smaller seizures--speech arrests--fairly often.  I'm not going to describe them right now because I don't feel like it.  They're frightening and distressing to me.  They feel--metaphorically rather than physically--like a punch to the gut.  Physically they feel nauseating.  And those seizures mean that I'm not allowed to drive.  There's a very good chance that I'll never be able to drive again.

It almost makes me tear up to write that, sitting here in the lobby of the Greyhound station.  I haven't written much here about my seizures.  I haven't written about them as a disability, even though they clearly are disabling.  I am a person who studies disabilities in great depth.  It's the focus of my scholarship, and I do a fair amount of activism around it, too.  So why don't I want to acknowledge my own disability?

Fear, I think.  And ego.  Fear because the seizures are connected to the brain tumor, and the brain tumor is connected to my mortality.  Fear because I don't want them to get worse and force me to reimagine my professional and personal life.  Ego because I want to be a person who drives.  "I'm not the kind of person who rides a bus," my ego announces.  "It's unacceptable!"  I feel ashamed to be a person who has to take cabs, or ride a Greyhound.  Flying is, of course, perfectly acceptable, as is taking a cab to the airport.  Those things can almost be prestigious, so I have no weird feelings there.  But not being able to drive to the grocery store, or the bank, or a speaking engagement a few hours away, feels shameful.  It's class based, of course, and based on my desire for "independence," for the ability to control my own movements.

I get that this is troubling, irrational, contradictory to some of my deeply held beliefs about accessibility,  identity, and human value.  I get it.  I'm not defending this!

But I'm feeling it.  And now I'm writing about it.  First time, right?  Here I am, feminist disability studies scholar, discussing my own disability.  Discussing my fucked up conflicts, conflicts I'm going to need to address.

I guess now that I've launched into this, you might hear more about it.
Posted by Alison Piepmeier at 8:58 AM 11 comments:

My dad is a huge advocate of Big O donuts in Cookeville.  Bless its heart:  Big O's tries hard, and my dad tries hard to convince me that their donuts are better than Ralph's.  We all know that Ralph's butter twists are one of the top five foods in the world, so Big O's doesn't stand a chance of being better.


But you know what Big O donuts are?  Enormous.


While cinnamon rolls (or as Maybelle calls them, cinnamons rolls) from Wildflour are as big as a human head, this cinnamon roll is as big as Maybelle's torso.  And so heavy that I wouldn't let her carry the plate.

So Big O's has its contribution to make to the world of donuts.  But Ralph's butter twist is like a dream come true...
Posted by Alison Piepmeier at 2:28 PM 5 comments:

Okay, folks, I now have a column with Charleston's City Paper.  A weekly column!  We're experimenting with making Feminism, Y'all a more regular feature in the paper.  I'm curious. We'll see.

Here's the latest:  it's about how much South Carolina sucks when it comes to undocumented immigrants (honestly, my column could be titled:  Ways in Which South Carolina Sucks).
Posted by Alison Piepmeier at 8:38 AM 1 comment: