What should I write?

It's been a while since I've written for The City Paper, and I'd like to connect with them.  It's okay if I write about my brain tumor, since I hear about this all the time from Charleston and all over the country.  But I need to write something that's not exactly what I've written before.  For instance, Chris at The City Paper said, "And it’s cool to mention your ongoing trouble with words, but do so sparingly bc we’ve touched on that several times."  I see what he's saying--I do think about communication all the time, but it's not all that exciting for any of you all.

So:  any ideas?  That's truly why I'm writing this.  Give me some thoughts.  I might be inspired and will write an article for the paper.


Posted by Alison Piepmeier at 8:16 AM 7 comments:

Oh, I hate the IV infusion

Let me start with the good things, which are significant and important:

Now, onto what I'm here to write about.  How I hate it here in the hospital.  I've been here once every other week for several months, and it's gotten worse and worse in my feelings about this experience.  It's not that I'm really experiencing awful panic attacks or severe pain--not at all.  But here are things that make me anxious, angry, out of control.

No longer have to wait

Brian and I were at Duke from noon until 5:30pm, mostly waiting.  At 4:30pm, we learned that my brain tumor isn't growing.  The IV infusion medication is working.

It's excellent news.  My Three People Dream Team at Duke Cancer Center were satisfied that this time through, the chemo is working.

I'm sorry that I don't have more to say.  After a full day of that sort of intensity, I'm completely exhausted.  I'm going to finish writing this message and then go to bed.

It was a good day.

And now here we are.  Brian and I are at Duke's Cancer Center, just outside the neuro-oncologists' office where my three medical folks will talk with me.  It's 2:35pm, and we're early.  We've been early every step of the day.  Being early makes no difference--it could be an hour or more before we find out what Sharon, Gordana, and Elaine have learned in the MRI.

Years ago, my neuro-oncologist was great, although I'm not sure I agree with everything he did. For example, I had an MRI before the holidays.  Lights were up on trees on Rutledge Ave.  We had a Christmas tree in our house.  Maybelle and I were soon going to go home and be with my parents for a couple of weeks.  Jim called (I always call professional doctors by their first names, and they do the same--works well).  My body was instantly flushed with adrenaline.

"It's looking good," Jim told me.  "Nothing to worry about.  Merry Christmas!"

Relief washed through my body.  Here we were, Christmas.  Of course, it was the 2011 holidays--shit was all over the place in the holiday challenges--but they weren't about the brain tumor.

Shortly after the holidays were over, Jim called.  "We're seeing a little growth in your tumor," he said.  The tumor had begun growing before the holidays, but he didn't want me to have to deal with that fear and depression during the holiday season.

Kind, I know.  But not what I want.  This is my body.  I am central to the decision-making here.  The medical team will provide information, then we'll talk to find out what options are available, what they mean to me.  Every time I'm interested in my death and whether it's time for me to begin making those plans.  I feel like a full, blessed, loved, supported person when I'm allowed to be an adult in days like today.

The day before my birthday.

We're still waiting in the lobby.  I'll let you know what I find out.
Posted by Alison Piepmeier at 2:51 PM 5 comments: 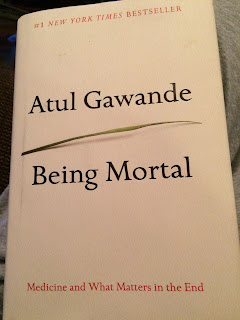 Motherfuck.  This is a way to reject these questions, but Cheryl Strayer would say, Write like a motherfucker.  Can't dismiss the life I'm living.  So I sit here with the questions, and I let those questions float around in my mind, my body, the places I sit, the feelings of the holiday as it emerges throughout the neighborhood.  Smell.  Taste.  Breath.
Posted by Alison Piepmeier at 10:09 PM 11 comments: