Yep, once again it's SJH

It's already 4pm in Cookeville, TN.  We've eaten round one of our turkey and gravy.  We've made a big bowl of whipped cream, and our three pies are on the table, waiting for us.

And my family said, "Aren't you supposed to write something for that person you write about on Thanksgiving?"

Yes!  So here I am, sharing the importance of a woman who was one of the most powerful people in the 19th c.  She was an editor, writer, etc, and although she had troubling characteristics like a lot of her cohort (white privilege, anybody?), she also tried to make the world around her better.  Her name is Sarah Josepha Hale.

There are loads of powerful and culturally significant things I could tell you about SJH.  Every Thanksgiving I bring her to the blog because she's the one who made Thanksgiving a national holiday, and it's time for another nod to this woman.

For 25 years, she wrote letters to the Presidents.  She was like, "July 4 is a great holiday, but it's the only one we've got.  You know that it would help our national unity if we had one more holiday, at a different time of year, that has symbolic connection to the founding of our country and all that."  She said, "You know that everybody loves turkey, and people need an excuse to eat a ridiculous amount of pie.  So come on."

Because she was the editor of Godey's Ladies Book, a magazine that was so famous that it makes famous things today look puny by comparison, people paid some attention to her.  And in 1863, Abraham Lincoln said, "That SJH has a good idea.  This Civil War's got everybody down, and pumpkin consumption is on the decline.  The sweet potato lobby has been pushing for more support.  So what the hell:  let's make Thanksgiving a national holiday, on the fourth Thursday of November every year."

And here we are:  we're celebrating Thanksgiving, but most of us don't consider that this is a holiday someone's been lobbying on for more than two decades.  We need to acknowledge the efforts of Sarah Josepha Hale.  Many of us now have the day off (not, of course, employees at gas stations or Walmart).  We have unbelievably good food--in my case, two of my favorite foods.

And most importantly, we have the opportunity to reflect on what our highest priorities are.  What happened this year?  Who are the people who've provided support for us, or who we've been able to support?  Are there moments that will be part of our memories forever?  What matters most in November 2014?
Posted by Alison Piepmeier at 5:49 PM 1 comment:

New haircut that is FANTASTIC

I'm making some serious progress with chapter 6 in my book.  I'm having this sense of here I am.  Satisfying.  Satisfying.

I'm working on a column for the City Paper, a column that will--wait for it--deal with something other than brain tumors and radiation!  It will deal with political issues, one that's quite impressive and one that allows me one of my favorite kinds of writing:  I'll get to be outraged.

But I'm not going to give you excerpts.  Instead, I want you to see the haircut updates I had done yesterday.  This seems to be hair that requires no attention.  I woke up this morning, patted my head, and there you go:  done.  Plus, this hair isn't at all girlish.  It doesn't have the "I'm a really sweet middle-class mom."  Instead, my hair says other things.  "How's it going ?" (that would be my hair not being dramatic), "Is she a woman?", and my favorite, texted to me by a friend:  "Baller."

Getting through the motherfucking radiation has been a shitstorm.  In the last couple of weeks, radiation kept feeling worse and worse and worse.  I started having to take Zofran every eight hours to counter the nausea.  My neuro-oncologist gave me some suggestions for pills to take in between those eight hours, and I started taking them, too.  I took Advil because a side effect of anti-nausea pills is a headache.  Plus, having my head filled with radiation and stuff every day caused some pain, too.  Sleeping hours a day.  Unable to identify my hunger.  And when a doctor has presented every single aspect of my health care phenomenon, they've informed me that it causes constipation.

Here's what my head looked like while I was going through radiation: 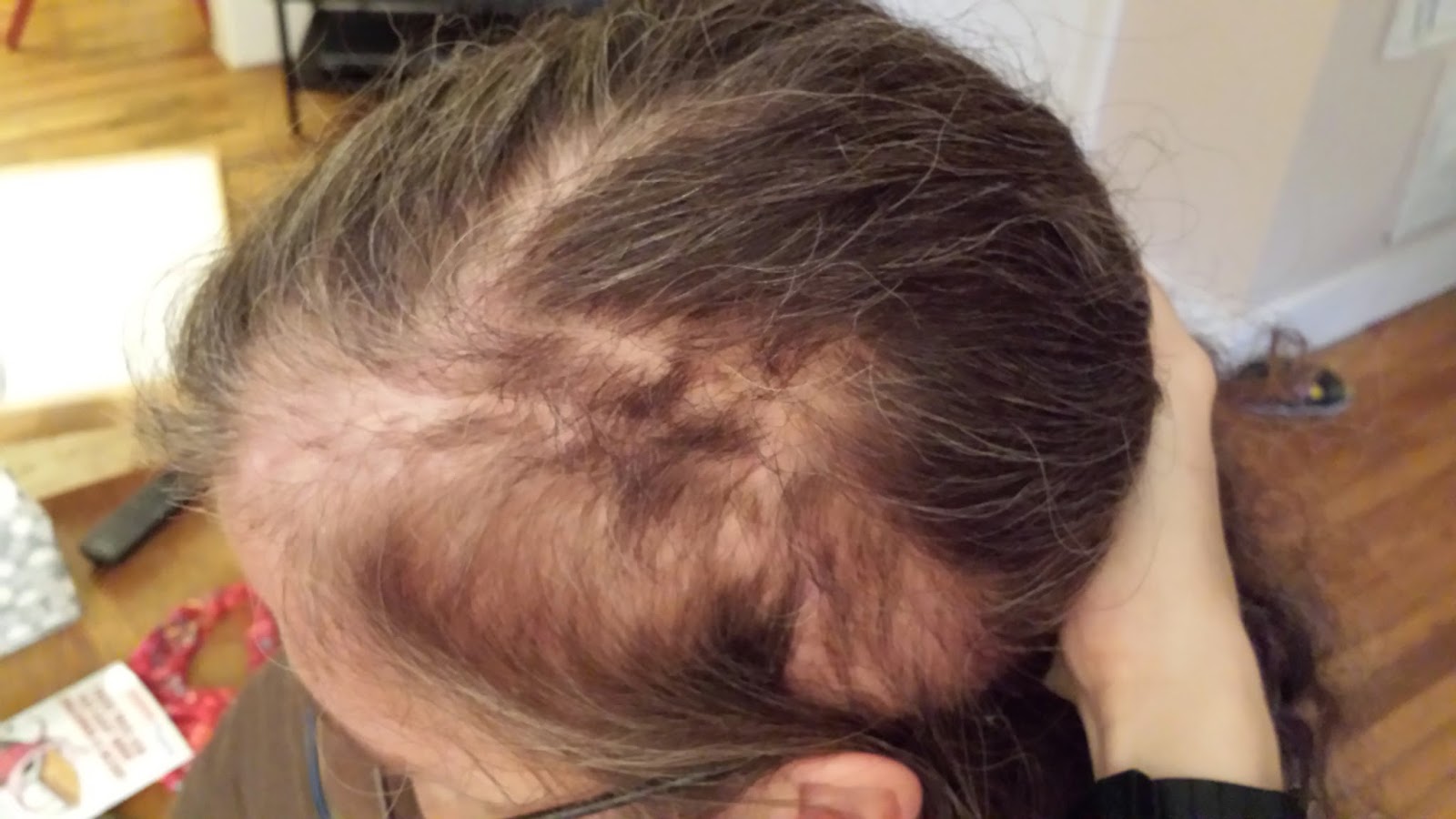 Every time I took a shower, or even touched my head, quantities of hair would come off.  That's some serious hair.  That's my head saying, "Abandon ship!"

On October 30, my radiation stopped.  I was done.  Done.  I was celebratory!  Here are the ways I documented that day: 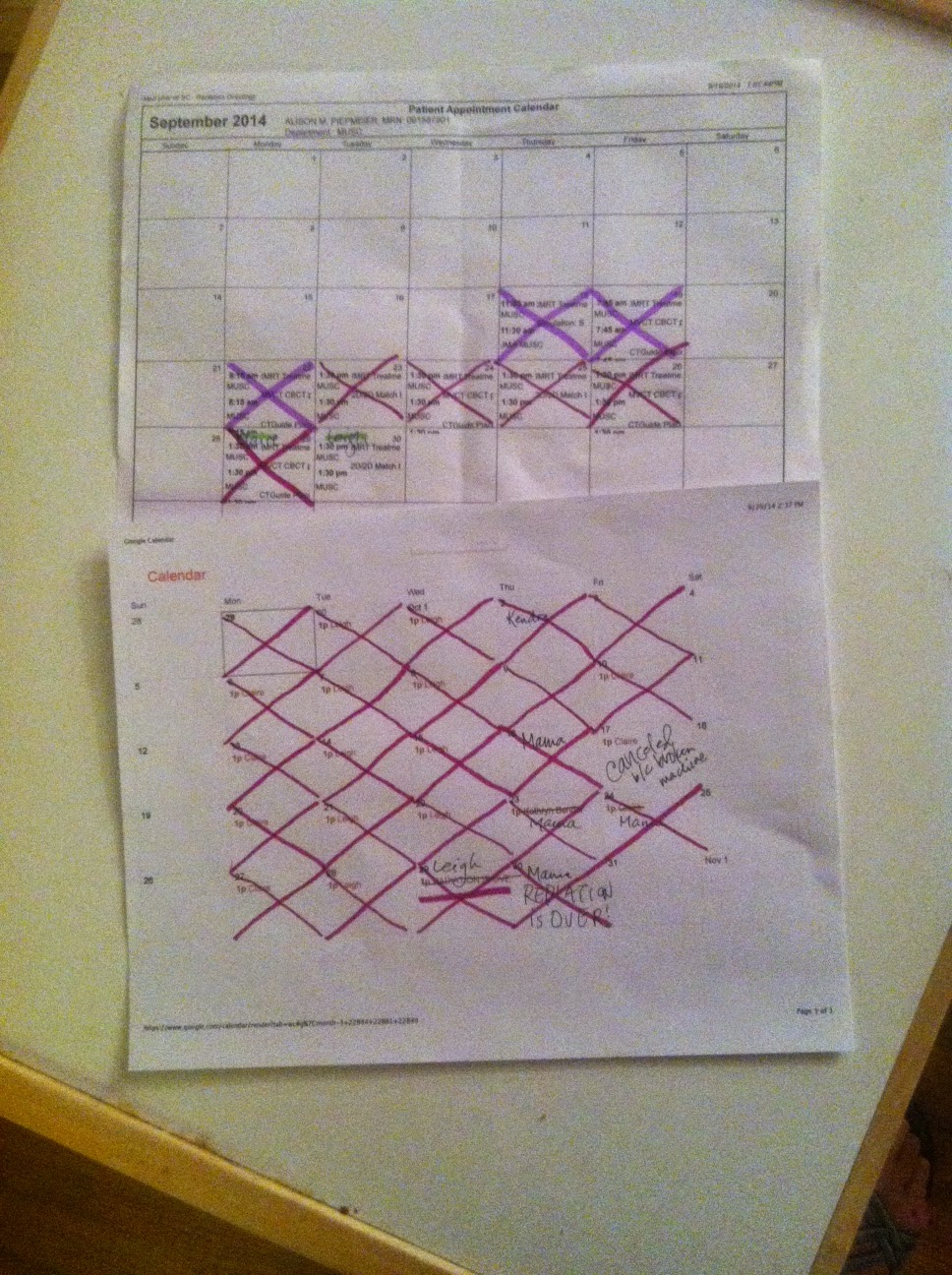 The calendar that tracked the process.  I got to cross off every day that I completed radiation, and then I got to recycle it on Oct. 30. 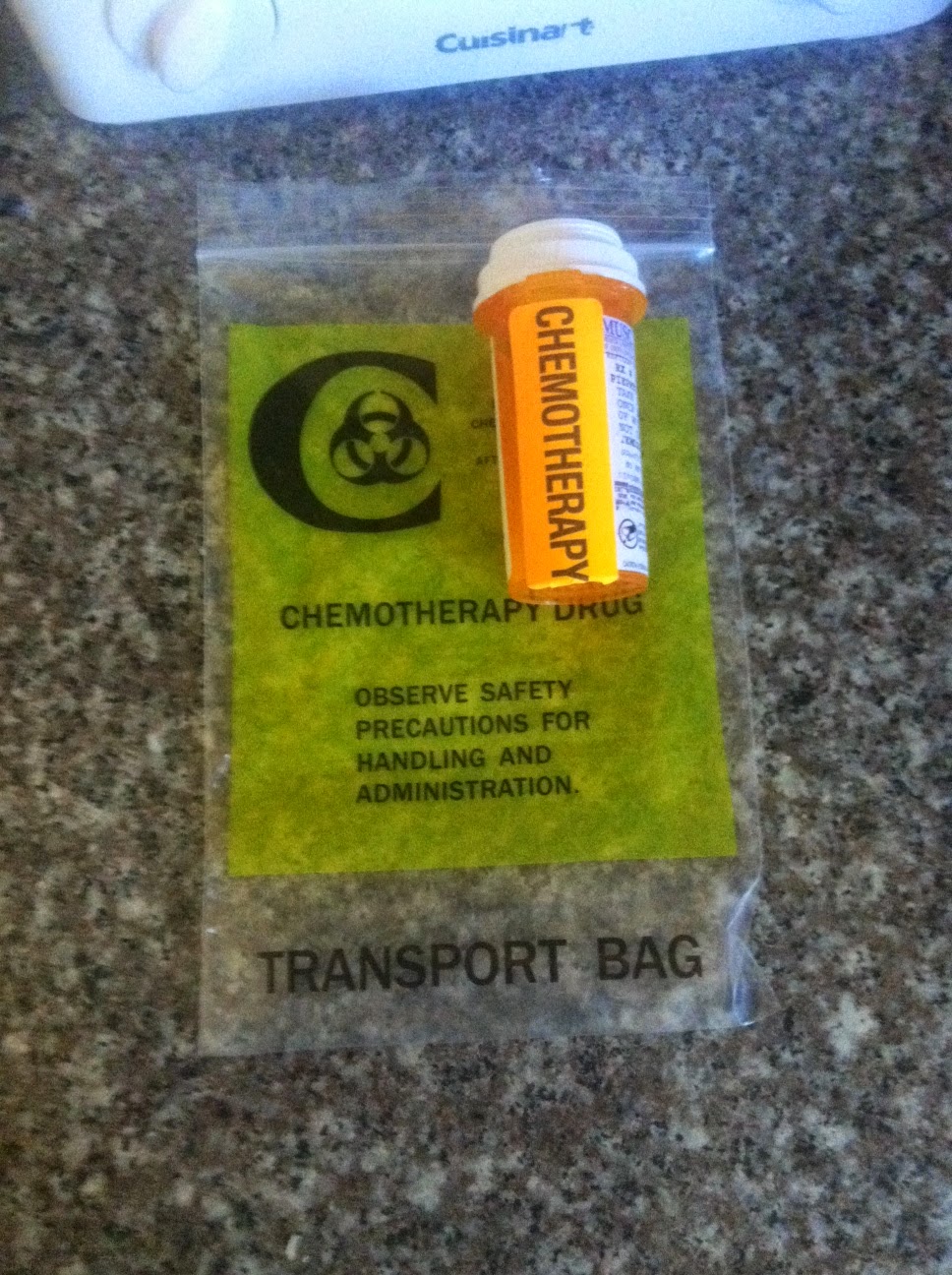 The container of Temodar, my chemotherapy, EMPTY! 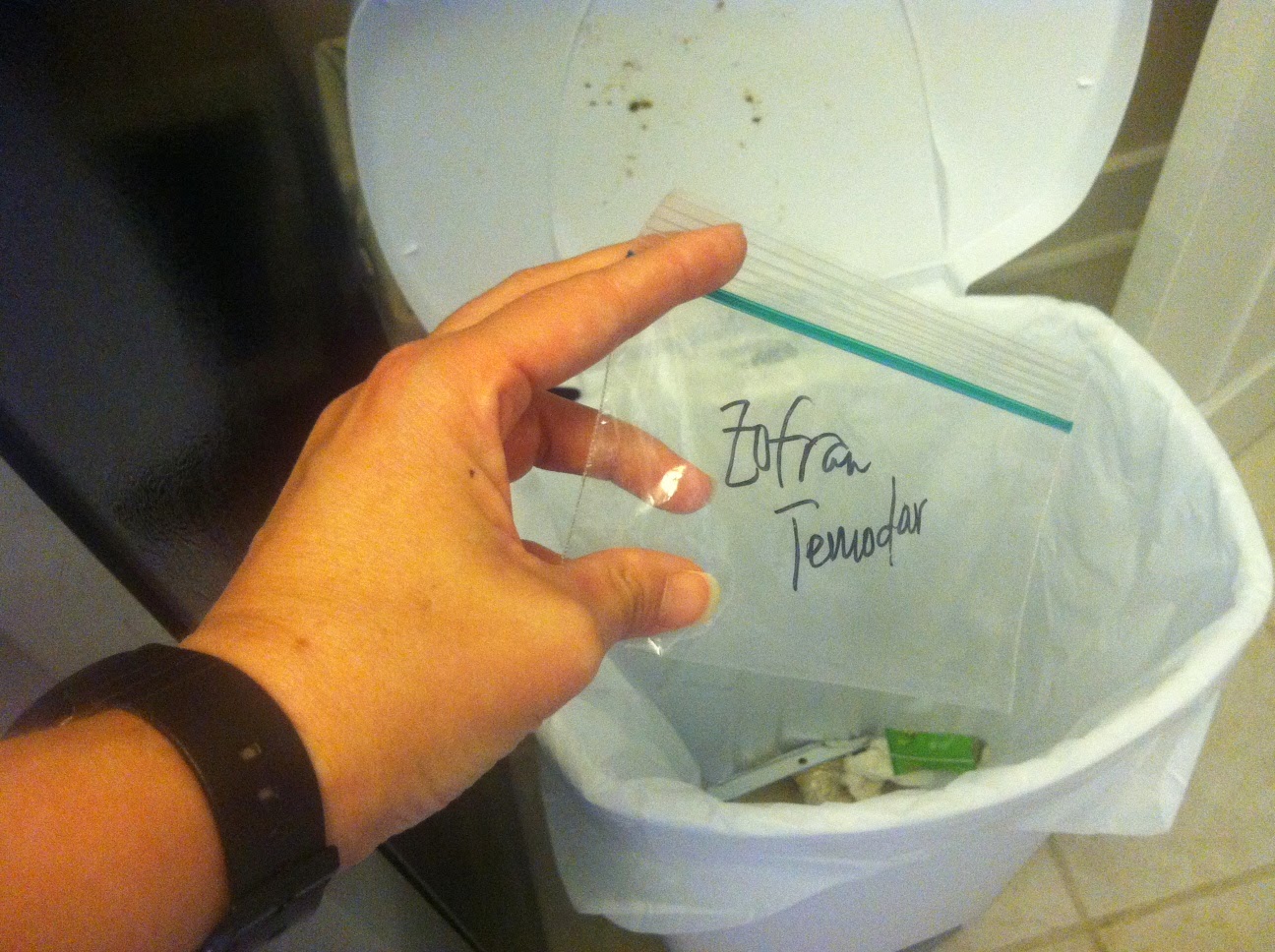 I kept these near me at all time so I did't forget to take the magical Zofra half an hour before I took the Temodar.  So satisfying to throw that baggie away. 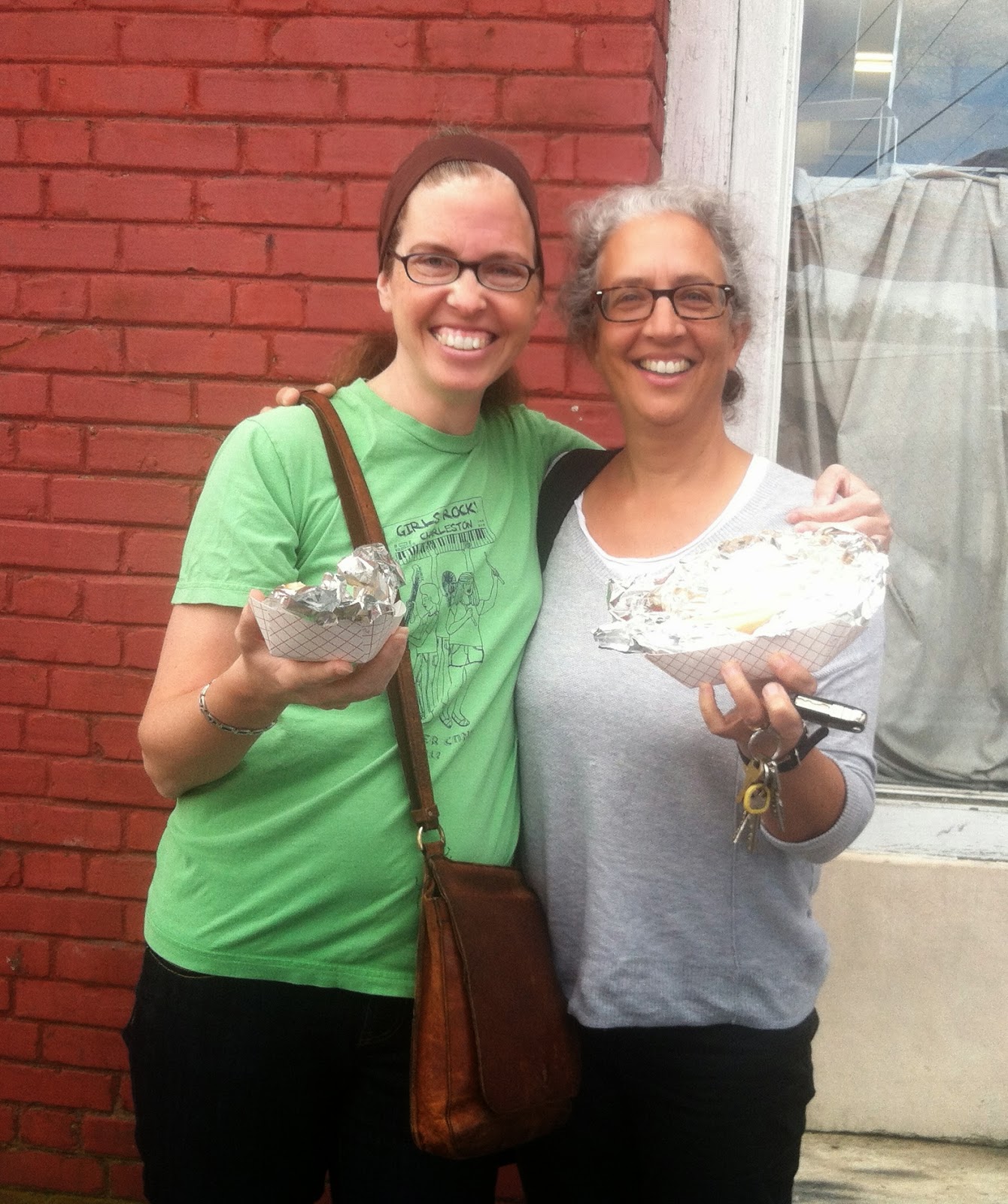 When Claire escorted me out of my last radiation session, she talked through several food options we might use to celebrate.  Muffins?  Blech, no.  Cookies? Blech, no.  Hot dog?  Why yes, I think that would be delicious!  And it was.  And the nice hot-dog-selling-guy took our picture.

Plus, I got to ring a bell at the radiation center--sounds goofy, but actually was satisfying.  The man ahead of me rang it, too, and it felt meaningful to have even the smallest recognition of having gone through that challenging experience.

I made these cups for some of my friends:
The next day, after a Halloween parade with Maybelle's class, mom and I went to a salon, where they dug into my hair.  I didn't know exactly what I was looking for.  This?
I didn't know.  All I knew was that I was going to have less hair than I'd ever had before (an article about this in the Charleston City Paper).  As I told one friend, the last time I had this small amount of hair was at birth.  I thought I'd have a little bit of grief.  I was prepared to feel the loss.

They wouldn't cut all of it yet.  As one of my friends had pointed out, and as this salon person also noted, is that if they cut all my hair, there's not a damn thing I can do.  I'm stuck.  So instead, she tried a hair cut with some actual hair, and told me I should sit with it for a week.  If I still want my hair, come on in and they'll mess with it. 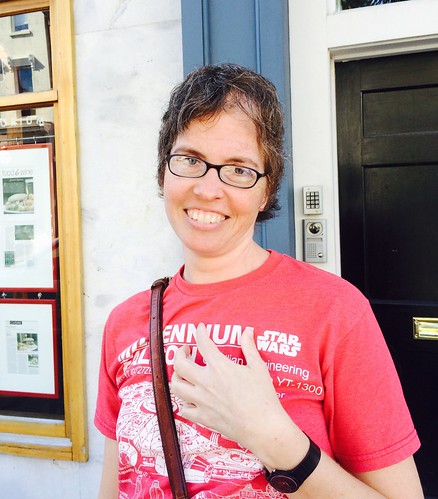 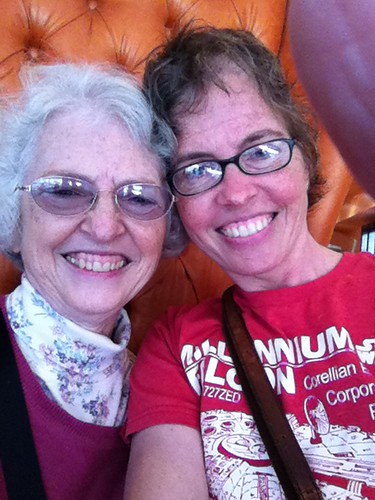 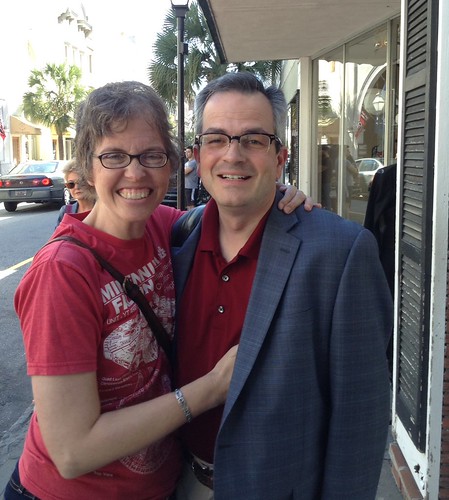 I think it's pretty cool.  But I might have them cut off more when Maybelle and I are back in Charleston.  Part of my head still presents brain-tumor-revelation, as it should: 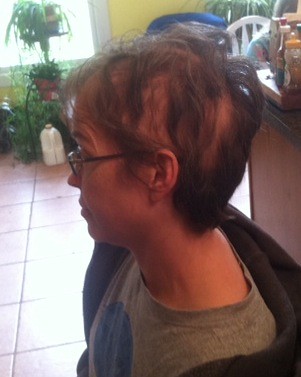 There are so many things I want to share:  Maybelle struggling with the changes she's experiencing.  The ways in which I continue to feel shitty.  How difficult it continues to be for me to ask for help.  My fucking fury that I might not be able to do the things I'd (foolishly) planned for this semester.

But it's taken me four days to write this blog post, so I'll stop for now.
Posted by Alison Piepmeier at 10:52 AM 17 comments: