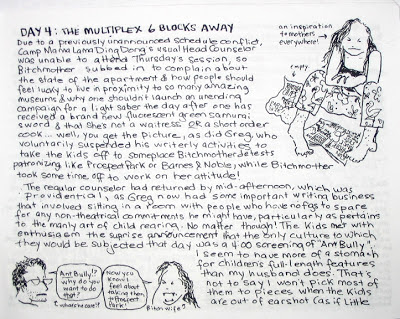 I spent a small part of this morning as Bitchmother.  Fortunately, I have a friend (who shall remain nameless because I haven't asked her permission) and Ayun Halliday (who shall be named because she's published about this) who have told me that Bitchmother is an inevitable occurrence from time to time.  (Okay, now I've published a page from The East Village Inky without permission, so all of you please scurry over to this site and buy some fabulous stuff from Ayun.)

But back to my point:  this morning Maybelle broke a bowl.  I think it was mostly an accident, although I think it was also sort of an experiment.  Yes, if you toss it, it breaks.  And it was glass, so it broke into lots of little dangerous pieces.  This happened while I'd ingested only half a cup of coffee, and after a night in which I'd had a bunch of nightmares about things like:


And then I went to get the broom, which had disappeared, so what I had to sweep the glass up with was Maybelle's broom--and it's about two feet tall.  This is when Bitchmother emerged.  Maybelle was sort of fascinated with the sweeping.

"You have to get out of the kitchen," I said, still mostly calmly.  "There's glass on the floor, and it could hurt your feet."

Still no moving.  My fangs were emerging, and I started treating her like Gabe, the dog.  "Bye bye, Maybelle!  Bye bye!"  This is what we say to the dog to make him go away.  It actually works for him.  Not so well with Maybelle.

I then pushed her out of the room, saying, "Bye bye!  Go away!  Go away!  Mama is really irritated!"

This is the point at which her tears started welling up.  And I swept up all the glass before I comforted her.  Bitchmother.  I'm glad I have role models to assure me that this behavior isn't going to cause too much damage.
Posted by Alison Piepmeier at 10:18 PM