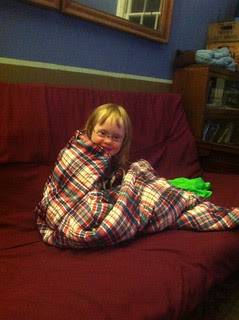 Tonight Maybelle got indignant because I was laughing. I was laughing out of enjoyment, I promised her--not at her, but because she was making me happy.  But she said, "Mama laughing, stop it!"

I was laughing because her current favorite song is the Squeeze's "Black Coffee in Bed," and as we were leaving Claire and Larry's house, she was casually singing it:  "Black black black coffee in bed."  It's rare that a four year old is singing that song, and it's pretty adorable.  But I am no longer allowed to laugh at her while she sings it.  Which is going to be difficult.

I thought it was very cool that she noticed I was laughing in response to her, took offense at that, and communicated her offense.  As far as I know, that's a first for her!  Claire said to prepare for more of that.
Posted by Alison Piepmeier at 7:50 PM