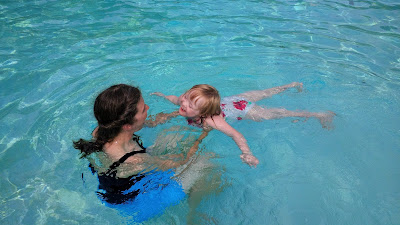 I mean, she loves it.  That's one of the reasons she's such a fan of Camp Baker:  they swim twice a day, every day.  They worked on actual swim skills this summer, and when I took her swimming this weekend, I got to experience those skills.

You can't really see it in this picture, but she was in the pool for an hour, and the entire time, she was kicking her feet and moving her arms aggressively.  And laughing.  She would climb up to the edge of the pool, and then as soon as she was holding adult hands she'd leap into the water.  I remember during previous summers at Camp Baker, the swim instructors had commented--as a concern--that Maybelle had no fear of the water at all.  While I think she still has no fear (she'd inhale a mouthful of water and cough, but then immediately she'd be smiling, wanting to swim some more), she's learned some safety skills, and that's a good thing.

By the end of our swim session, I was basically supporting her with only one hand under her abdomen.  She was doing everything else--keeping her head up, kicking, trying to get her arms to move functionally.  I was so impressed!

She enjoys swimming so much--enjoy is far too weak a word--that I suspect it feels really good to her.  She doesn't have a sensory processing disorder, but her occupational therapist has talked about some sensory processing issues.  For instance, one of the toys Maybelle really loves is a huge sheet of spandex in which I wrap her up, lift her into the air, and swing her around around.  It applies pressure evenly (and pretty strongly) all over her body.  Kids with various kinds of sensory processing challenges find those swings very soothing.  And water is similar:  it's a steady pressure all over the body.

The only way I got her out of the pool was to tell her she'd get to watch some TV.  And I actually think that wouldn't have worked except for the fact that she was completely exhausted.  As we walked away, she said, "Bye bye, swimming!"  I corrected her:  "See you later, swimming!"  We'll definitely be doing more of that.
Posted by Alison Piepmeier at 10:57 PM