Go home, said the man in the moon, go home.


We're back in Charleston.  It was a late trip, due to some family factors that were challenging but are ultimately just fine (let's just say that this is the second time in my life that a man I'm close to has gotten the flesh-eating bacteria, which is treatable if you flood the body with high doses of very, very strong antibiotics).

Maybelle continued to be a great traveler on this trip.  In the time that we were in Cookeville, Trey, Olivia, and I discovered that our rental monstrosity had a DVD player in it, so after we'd been on the road for about five hours, when Maybelle was starting to get a little restless, we popped Mary Poppins in the player.

DVD player in the car:  clearly a truly bad idea.  Leads to neglectful parenting.  Cuts off meaningful opportunities for parent-child connection (like an hour of "gimme five!  Right on!").  And yet...soooooo easy!  Maybelle was happy, and Trey and I were in the front seat getting to talk about Big Life Issues.

Then Trey looked in the rearview mirror.  His face changed to an expression of horror.  "Oh, my," he said. 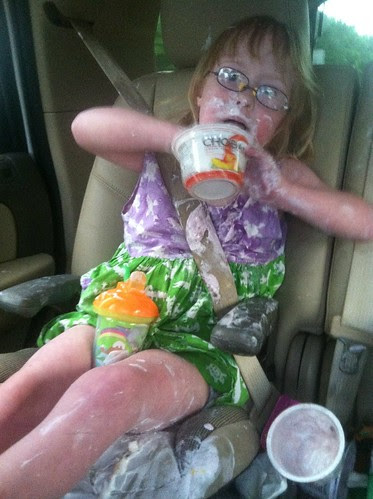 Here she is.  Several of you have already seen this picture on Facebook and Twitter, but Trey and I agree that this picture significantly downplays the mess that was in the backseat.  Multiply this picture by three times as much yogurt, and you've got a clearer sense of what we were both seeing.  Maybelle had apparently dropped her spoon, but rather than fuss at me to get it for her, she discovered that she could eat her yogurt with her hands.  And she did--two yogurts.

Then she discovered that yogurt feels great when it's smeared on the carseat, on her arms, her legs, and the window.  She discovered that blueberries from the yogurt could be shoved in between the two seats.  That blobs of yogurt can be put into cupholders.

I did the best I could using wet wipes to get clumps of yogurt up, but truly cleaning up was hopeless.  So we let the yogurt dry on her body while she watched movies, and while it got darker and later.

Fortunately, children are fully washable, so I gave her a quick shower when we got home (did I mention it was 11?  PM?), then she and I both went to bed, unpacking nothing, snuggling together in exhaustion. This morning Trey and I managed to clean the rental car quite effectively.

"Go home!" Maybelle cried out happily when we got to the house, and again this morning when she woke up and realized where she was.  "Go home!  Mama and Maybelle."  We had an excellent trip to Cookeville (and Nashville), and we are both very happy to be home.  Sort of ideal.
Posted by Alison Piepmeier at 12:14 PM