Not a fraud as a parent

My adrenaline level on a typical day, when nothing big is going on, is probably a tad higher than the average person's.  This isn't necessarily a bad thing.  I kind of like it.  I like being revved up, being easily excitable, ready at a moment's notice to respond to an appalling situation or to have a dance party.

It also means, though, that I have a tendency toward anxiety.  Perhaps "a tendency" is a mild way of putting it.  I often have an inner anxious voice responding to things in my life.  Catherine calls this the VOJ:  voice of judgment.  It's a voice that's attempting to be protective but isn't actually reasonable, evidence-based, or functional.

I've had a number of individuals in my life--both paid professionals and outstanding friends--helping me to recognize and let go of this anxious voice.

One version of the VOJ says that I'm a fraud in lots of realms.  It's a voice that I encountered quite a bit in graduate school ("Everyone thinks I'm a competent graduate student, but they haven't recognized yet that it's all a performance!").  It became somewhat less compelling after I got the Ph.D. ("It may all be a performance, but everything I don't know is, by definition, something that someone with a Ph.D. is allowed not to know!")  And it became significantly less compelling once I got tenure and had several things published.  It began to seem that I did have thoughts that were interesting, performance or not.

But the VOJ emerges in other realms.  For instance, I'm sometimes willing to believe that my parenting is a fraud, that things are going so well because of luck or other people, or because Maybelle's just fantastic (the last item on the list is, of course, true).

Here's an example:  I lost Maybelle's glasses on Sunday.  She and I had biked to the big fountain downtown that people can play in.  The day was hot, the fountain was full of kids, and Maybelle was delighted to be in the water.  She very responsibly took her glasses off and put them on the stone wall near the fountain before she ran into the water.  I then picked them up and hung them from the neck of my t-shirt.

Maybelle and I walked, she splashed and played, I sweated, and finally it was time to go home.  At which point I reached for her glasses so that she could wear them...and discovered they weren't there.

I tried searching, but it's tough looking for wire-rimmed glasses in the midst of a thousand happily screaming kids, while holding your daughter's hand.  So we biked home with no glasses.  I went later and looked again, but with no success.

Now, I get that I'm not actually a parental fraud.  I do have a cognitive awareness that losing your child's glasses is irritating, but not evidence of failure or disaster.  It's irritating!  That's it!  So don't feel that you have to leave comments assuring me of my competence.

Let me move along with this story:  Maybelle loves her glasses.  She likes to put them on first thing in the morning.  "Glasses!" she said yesterday morning.  "Help!"

So yesterday I searched the house and found a spare pair of glasses that were identical to the ones I lost, except they were missing the nosepieces.  I took them to two different glasses shops yesterday, and two different people wrestled with them and tried to pry a broken screw out of one side so that they could put new nosepieces on.  No luck.

So I bought Krazy Glue, sliced up a squishy foam ear plug, and glued the tiny soft bits to the nosepiece holders: 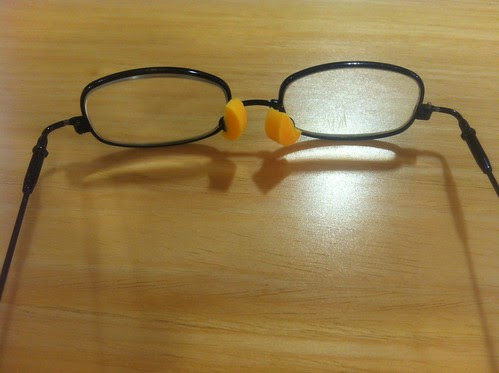 And who is now wearing glasses, repaired by her fantastically competent mother? 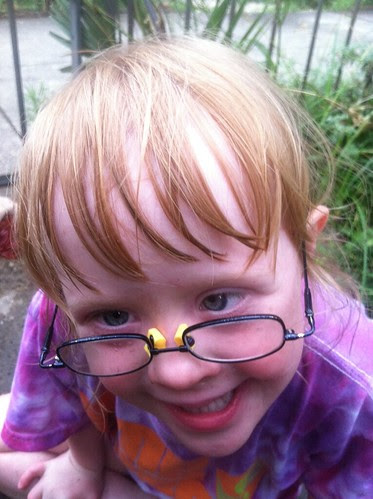 Yes, that would be Maybelle.  These glasses are comfortable, and she's happy to be wearing them.

And for those of you who think that this might not be the world's greatest glasses repair (ahem, Kevin O'Mara), rest assured that I called her ophthalmologist's office today, got her prescription faxed to the glasses place, and they are putting together a replica of the pair of glasses that I lost.

Not a fraud as a parent!  Hurray!
Posted by Alison Piepmeier at 7:21 PM