Alison in NYC for one more day

The talks that George and I gave, and Rachel responded to, last night were well received by a great audience.  Loads of wonderful responses and questions.  I felt like a fan girl, swooning over Eva Feder Kittay,* Rayna Rapp, Faye Ginsburg--how did I get so lucky to have all these amazing scholars listening to me talk?

Meanwhile, as I was enjoying myself on the campus of Columbia, storm clouds were gathering over Charleston.  Apparently the greatest sleet storm ever to happen is on its way to Charleston.  Which means that every flight into the city has been cancelled.  Here I am, in NYC, for another day.

For most of the day I've been hunched over my laptop doing things that I've been meaning to do for a long time but haven't done (answering old emails, revising articles that were supposed to be revised, preparing a talk I'm giving on Friday).  But in the early afternoon I took a brief break to have a little New York time.

First of all, I hailed a cab and successfully explained where we were going.  Claire has strongly urged me to get a "real bagel" (or what Trey referred to as "New York Butthole Bread"), so I had a goal.  The cabbie delivered me to a place that the internet says is one of the best bagel bakeries in the city. 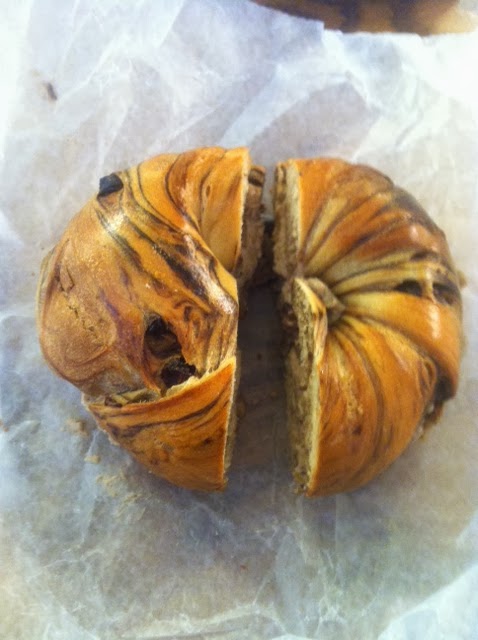 I haven't eaten the olive one yet, but the raisin one was delicious.  But here's the thing about "real bagels":  they are the consistency of beef jerky!  I'm gnawing and gnawing, doing damage to my jaw muscles.  And the thing is fresh. It's not like this is old, dehydrated bread.  It was made today!

I'm glad to be able to complain about it a bit, because that's part of what makes it a real vacation experience:  if the bagels here were the same as the bagels in Charleston, then what would be the fun in that?  No drama at all.

After the bagel, I strolled around and walked into a market.  It was deep...lots and lots of shelves, filled with amazing things...and as I got to the back, I discovered that this market had more cheese than I'd ever seen in one place.  This picture shows you about half of the cheese shelves.  The store also had fresh bread bins, olive oil shelves, chocolate shelves.  Sort of a miraculous place.

Then I successfully hailed another cab and got taken back to my hotel.  Here's what it looks like in New York right now:
Maybe that's what it's going to look like in Charleston later today!


*I need to acknowledge--as I told Eva last night in a squealing, huggy, OMG-it's-you! voice--that I quote her in virtually everything I write.  I love her writing about her daughter, Sesha.
Posted by Alison Piepmeier at 2:52 PM