This weekend Maybelle and I went to visit Eliza and her family in Washington, DC.  It's a trip I make regularly, but it had been a long time since I'd traveled alone with Maybelle.  I flew to Tennessee with her two summers ago, and when she was a tiny Bjorn-sized infant, I took a couple of flights with her (those were really easy), but I didn't know how the traveling together would go. 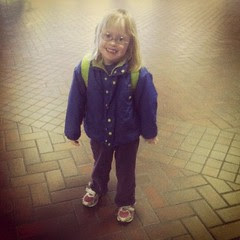 It went great.  Maybelle is an outstanding traveler.  She was eager to go to the airport, she loved wearing her backpack, she thought the plane was exciting, and during the entire flight she played with Lela and the girls, read books, and sang songs with me.  On our first flight we were all boarded when they discovered something that had to be fixed.  It meant we sat there on the vaguely stuffy, hot plane for thirty extra minutes, but it made no difference to Maybelle.  She was a great sport.

I've been visiting Eliza in DC for a dozen years now, and I'm not sure that we've ever done standard touristy things.  But this time, the weather was cold and windy, and also this time Maybelle was a full-fledged kid--so Eliza suggested we try the Museum of American History.

The Smithsonian museums are amazing.  They not only have some of the best stuff in the world on display, but they're also completely free.  Which means anybody gets to go there.  It also means that the stakes are incredibly low with kids.  If Maybelle decided that the museum was the worst thing she'd ever experienced and lay on the floor screaming, we'd happily move on to something else--we wouldn't feel like, "We've spent $60 to get us all in, so we're staying, dammit!"

Maybelle loved the museum. The whole building she thought was great--we entered the lobby, and she was fascinated--not so much by the exhibits as by the great big room full of space for dancing.  Then we turned into the transportation exhibit, thinking she'd like to see trains and surreys with the fringe on top--things like that.  Those were fine, but what really fascinated her were the statues of people. 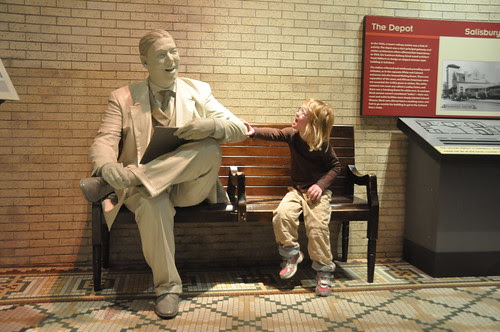 She assessed their situation and talked to them.  "Good morning!" she said to this guy. 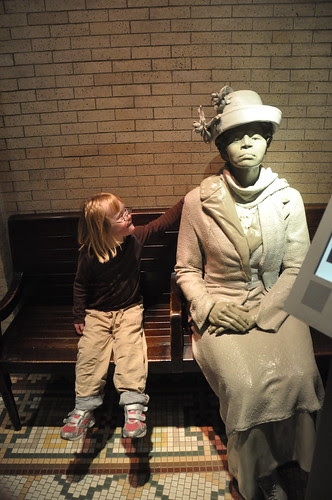 She was a little concerned about this woman, whose name I don't remember.  She looks stern because she was an African American woman waiting to board a train where she's likely going to be harassed or worse.  She's well dressed, and her self-presentation is letting everyone know that she is respectable and therefore should be treated as a human being (this is called the politics of respectability, as my capstone students know).  But at any rate, Maybelle wanted her to feel better.*

And then there was a little nook in the transportation section where a guy was trying to sell a car to a couple.  It represented the 1950s, and there was some 1950s car of some sort on display.  Truly not that exciting, as far as Eliza and I could see, because who the hell wants to spend time examining a fake car sale?

She examined these three statues in great detail.  She touched their fingers and their shoes.  The woman--who was pregnant--got a lot of attention.  Her hair, the bow around her neck, her whole body. Maybelle isn't allowed to examine actual living adults with this level of scrutiny, but with the statues, she could explore, and she did.  She explored not only their bodies but the ways in which they were interacting. 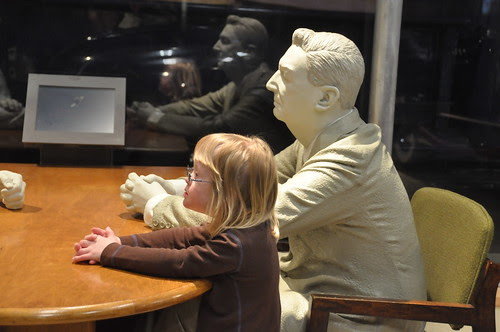 Eliza is an amazing photographer.  She took all the photos I'm sharing here (except the very first, which I took with my phone), and I am so happy that she caught this moment so perfectly.  Check out Maybelle, joining the interaction, imitating the car salesman's body posturing exactly, not only his hands but his facial expression.

Eliza did note that we were probably the only people in the history of this exhibit to spend this much time with the car sale display.  But it was great!  Maybelle had a wonderful time, and Eliza and I got to talk and talk.  We were in the transportation exhibit for probably two hours, and we only left because Eliza and I got hungry (and got Indian food!  Mmmmm.)

The rest of the trip was great, too--lots of hot tea and conversation, some time on playgrounds, some waffles.  And I know that when Maybelle and I return to DC, we'll be checking out more Smithsonian museums.


*I'm very tempted to go off on a tangent about how Maybelle herself is going to have to navigate the politics of respectability as a person with a visible intellectual disability.  But I'll save that for later.  She wasn't thinking about that at the museum, even though I was.
Posted by Alison Piepmeier at 7:36 AM