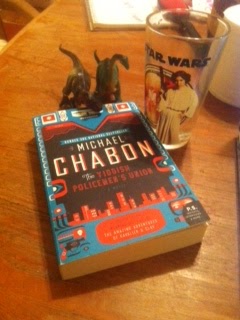 I'm interested in your feedback here.  I just finished reading The Yiddish Policemen's Union (2007), an excellent book by Michael Chabon.  I've heard loads of good things about it, recommendations over the years from lots of different folks, and finally Trey brought it over to my house and left it here.  So I read it.

Here's the thing:  it seems to me that one of the central thematic elements of the whole book is the fact that the main character and his (then) wife terminated a pregnancy when they learned that the fetus had a chromosomal difference.  The book isn't "about" this at all, but it comes up repeatedly, in significant moments. Of course I noticed this--my eyes pricked up at the very first mention of Django, the fetus who is described as having "an extra chromosome on the twentieth pair.... It might cause grave abnormalities.  It might have no effect at all.  In the available literature, a faithful person could find encouragement, and a faithless one ample reason to despond" (14-15).

I don't think I'm offering any spoilers if I say that as the book is coming to its dramatic conclusion, one of the things Landsman--the protagonist--ponders is Zugzwang: being forced to move when there are "no good moves" (400).  Being forced to make a decision when there are no good options.  My political theory friend Claire has informed me that this is called Hobson's choice.  My brother with expertise in Star Trek has informed me that this is called Kobayashi Maru.  Any good Southerner would tell me this is called "damned if you do, damned if you don't."

And this idea seems to be at the crux of many of the interviews I've had with parents of children with Down syndrome who are remembering their decision-making process:  to terminate the pregnancy or not?  It's certainly at the crux of conversations I've had with women who've terminated their pregnancies because the fetus was identified as having Down syndrome, the sense that there are no good options.

Bina, Landsman's ex-wife, articulates this quite well in the next to last page of the book.  She says,


We did what seemed right at the time, Meyer.  We had a few facts.  We knew our limitations.  And we called that a choice.  But we didn't have any choice.  All we had was, I don't know, three lousy facts and a boundary map of our own limitations.  The things we knew we couldn't handle" (410).

So, three things.  1)  "We called that a choice."  I think this phrasing is quite wonderful, given how critical I've become in the last several months (years?) of the language of "choice."  We like to pretend that things are choices when they're really people struggling to do the best they can with limited options, information, and support.  "A boundary map of our own limitations."

2) I find that I'm struck by the importance this book places on this sort of troubling life decision--reproductive decision-making that centers on an intellectual disability--and the fact that I haven't heard anybody talk about that aspect of the book.


*It may well be that Chabon is making reference here to the trisomy he and Ayelet Waldman's fetus was identified as having, a genetic condition for which they terminated the pregnancy.  Waldman writes about this process in her book Bad Mother.
Posted by Alison Piepmeier at 11:07 PM