Things going on: a quick update with pictures 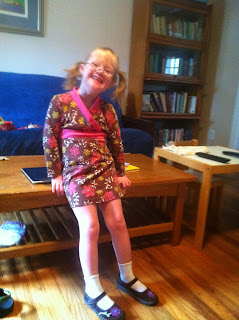 Maybelle and I are now celebrating the one-week anniversary in our new home.  And by "celebrating" I mean feeling completely exhausted but happy in the new space.  Maybelle fell asleep in about five minutes tonight (not the normal amount of time it takes her), and I decided to force myself to stay awake to write this post.  It's 9pm. 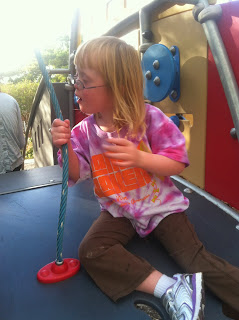 Here's Maybelle at the playground that's about three blocks from our new place.  It's super-nice, which means that a bunch of middle-class white people moved into this neighborhood a couple of years ago.  The city of Charleston was like, "Whoa, that nasty rusted out old swing set isn't going to be acceptable anymore."  I appreciate the playground even as I feel the need to roll my eyes when we go to it.

Nonni was here this week, helping us to settle in.  Oddly, I have no pictures of her at all.  But we had a great time, and I didn't have to bike from Wednesday on because I had a chauffeur here at the house.  Mom and I cleaned out the remainder of the attic and the inside of the old place, and we continued the process of making the new place more a home.

I had my inGenius presentation on Wednesday.  Good lord, was I anxious.  I truly practiced my talk 20+ times on Tuesday and on Wednesday.  I was reciting it over and over again on Wednesday--in the bathroom, riding the bike, walking across campus.  I made my student worker listen to it at least twice, along with other students who happened to wander into the WGS office.  Two different professionals wanted to talk with me, and I made them listen to the talk first.

All that effort paid off--I remembered the whole thing!  I never had the moment of terror of "What the hell am I supposed to say next?"  And I was really happy with what I said, the images that accompanied it, and the clip from The Wrath of Khan that I included so that I could have an explanation of the Kobayashi Maru.  Truly the only thing about the talk that I feel a bit bad about what that I was ending on a high point--talking about disability as an embraceable form of human diversity, and about Maybelle not having to meet certain standards to be a viable human being.  "She is valuable just exactly as she is," I said.  During this emphatic ending to the talk, this image was supposed to be on the big screen behind me: 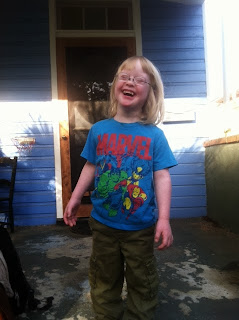 Unfortunately, the screen was black.  Oh, well.  I still felt great about the talk--I'll post a link to the video once it's up.

And I am so glad that the talk is over!  That much anxiety wasn't pleasant during a week in which I'd moved. 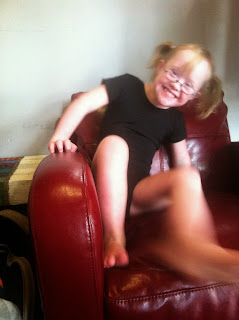 The child loves her dance classes.  Loves them so much that she continues to ask for them every single day.  "First school, then dance class."  Thursdays are big days around here.