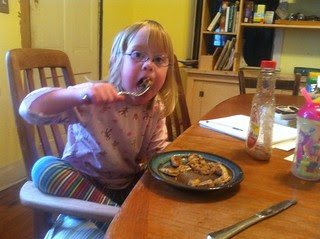 It's been a week since I've blogged, and the thing that's important enough that it's pulling me away from my end-of-semester grading to write here is

Maybelle loves waffles.  Perhaps as much as she loves strawberry-banana Chobani yogurt.  I am a classy parent, so she eats nothing but the best:  Nutrigrain Eggos with Log Cabin syrup.

But it's also occurred to me that not everybody has the approach to syrup that I have.  (Mom, stop reading now!)

I was raised in a healthy household.  HEALTHY.  It was somewhat alternative-lifestyle at the time, but now it looks pretty familiar:  every Trader-Joe's-shopping middle class person eats the kind of food my mother fed us growing up.  Nothing like high fructose corn syrup ever entered our house.  The waffles were made in my mother's own waffle iron, and they were drizzled with actual maple syrup.

Which I hated.  I ate my waffles with homemade (I'm not kidding) strawberry jam instead.

So here's what happens with Maybelle:  she gets her waffles drenched in syrup.  Not drizzled.  Her waffles aren't a dry bread-product with just a bit of syrup flavoring them.  They are soaked with Log Cabin.  Each bite is heavy and dripping.  There's a pool of syrup on her plate when she's finished.  A common waffle conversation is

And then I comply.

I got home from conferences exactly a week ago and went to the grocery store.  One of the things I bought there was a new bottle of Log Cabin.  Check out the bottle on the table in the picture above.  Empty.  And I haven't eaten any of it.  Maybelle ingests a full bottle of Log Cabin in one week's time.  That's pretty impressive, and really nothing at all like my childhood.

Now I'm going back to grading.
Posted by Alison Piepmeier at 8:44 AM