Brian Skotko, super-hero for Down syndrome 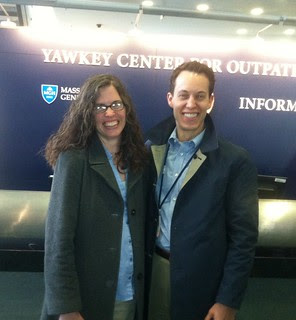 Yesterday as part of my adventure in Boston, I got to meet Brian Skotko.  Brian is a Board-certified medical geneticist and Co-Director of the Down Syndrome Program at Massachusetts General Hospital.  In many ways he's become the public face of progressive medical approaches to Down syndrome.  If Good Morning America wants a doctor with a specialty in Down syndrome, they call him.

I'm not sure how he crossed my path for the first time.  He's written some excellent scholarly articles about parents' and siblings' responses to having a person with Down syndrome in the family (the punchline:  their responses are astonishingly good).  When Bri and I were working together last summer, trying to flesh out the medical part of my book on Down syndrome, we decided to get in touch with him.  He was enthusiastic, eager to talk with us, and we had a wonderful conversation then, learning about his expectations and fears about Down syndrome, and learning about how much medical progress is being made.

I reached out to him the beginning of this week, on the off chance that I might get to see him.  He was warm and welcoming, inviting me to come tour the Down Syndrome Program at MGH and then sit and visit with him.

The Down Syndrome Program at MGH is wonderful.  They work with folks from their prenatal months into adulthood.  One of their main escorts at the Program is Ben, an adult with Down syndrome--often the first adult with Down syndrome that parents and potential parents have met.  They provide their patients with an array of therapies (occupational, physical, speech), but as the kids get older, they also provide them with a psychologist and with sex ed.  I'd like to tell you in more detail about the Program, but neither Brian nor I stopped talking long enough to completely finish one story before we were on to another one.

The thing that really struck me in our conversation was that because of the job I have, I'm given a lot of room for rocking boats.  In fact, rocking boats is part of my job.  If I were too dull, I wouldn't really be a good director of Women's and Gender Studies.  Identifying what's wrong and working to come up with solutions is at the heart of what I do, and very often what I'm recognizing as wrong is the society itself.  I got the sense that Brian wants to do a version of that, as well, but that life as a doctor doesn't provide much room for that.  He won't get tenure the way I got it--the institutional protection for him to be provocative, even radical.  He's going to have to be careful, particularly with an issue like Down syndrome, which is dangerous on multiple levels:


I'm now in the process of identifying an academic/activist community for him, a community with medical ties that recognizes the importance of reproductive decision-making and also recognizes the huge role that community plays in creating the meaning of a disability.  Some of you reading:  I will be emailing you soon, trying to set you up as pen-pals with Brian.

My final comment is that Brian is just great.  We had such a good time talking that I know if he lived in Charleston, we'd be having coffee (or sweet tea) at C&B at least once a week.  He ended our conversation with a hug and "See you again soon!"  I do hope so!
Posted by Alison Piepmeier at 8:55 PM