Fun Home: The Musical in Charleston 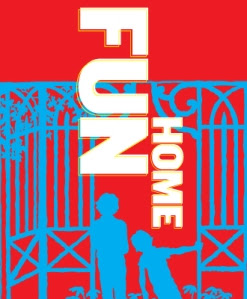 This is an unbelievably good opportunity.  I'm sort of astonished that the College of Charleston is getting such astonishing support from national performers and writers.  Please come out and see Fun Home, meet Alison Bechdel and the NYC cast, and applaud enthusiastically for academic freedom!

"We're Having to Fight Our Asses Off for Academic Freedom:  Fight the Power."
Posted by Alison Piepmeier at 2:06 PM No comments:

Lesbian recruitment; or, why the state of South Carolina continues to be a laughingstock

Senator Mike Fair is proudly announcing his homophobia and his lack of a sense of humor. He's on the homophobic bandwagon with Representative Garry Smith and many other South Carolina legislators.

While Representative Smith has been sending letters to his constituents arguing that “College of Charleston and the University of South Carolina-Upstate required that college students read blatantly pro-homosexual and pornographic propaganda,” Senator Fair has focused his attention on USC-Upstate. In the fall the university offered Out Loud: The Best of Rainbow Radio as a book for first-year students, and this spring they invited comedian Leigh Hendrix to campus to perform a comedic show called How to Be a Lesbian in 10 Days or Less. The show was part of academic conference called the Bodies of Knowledge Symposium. Rather than recognizing it has a humorous performance, Representative Smith said, “It’s recruiting.”

This elected official seems to actually believe that a comedy show is an effort to convert heterosexuals to lesbianism.

Senator Fair’s attack is troubling enough. But the situation gets worse: Tammy E. Whaley, assistant vice chancellor for university communications at USC Upstate, announced that the university would go along with Representative Smith’s demand. USC-Upstate canceled the event, saying that this was actually an action in favor of academic freedom: “The controversy surrounding this performance has become a distraction to the educational mission of USC Upstate and the overall purpose of the Bodies of Knowledge symposium.” I’m not sure how faculty can respond to this; it sends the message to faculty that they need to be careful about what they teach if their curriculum becomes “a distraction,” meaning it doesn’t fit with the beliefs of our state legislators.

The College of Charleston is facing similar pressures from the legislature and our Board of Trustees, since the House cut our budget while the Board nodded their heads compliantly. I’d like to offer CofC some praise and some encouragement: our administrators haven’t bowed to the homophobic pronouncements of the legislature. They didn’t call Fun Home a distraction or remove it from all College bookstores and classrooms. They didn’t apologize for having it as the 2013-2014 College Reads! selection. In fact, at a meeting with the College’s Foundation Board on February 28, President George Benson announced that the College is “safe and welcoming” to everyone who’s part of the campus community—“whether they are gay or straight.” He continued, “we will not censor books because someone, somewhere is uncomfortable with the existence of LGBTQ students, faculty, or staff.”

This month, USC-Upstate’s Chancellor Tom Moore (finally) made a similar statement: "LGBTQ issues are part of any campus life. As a public university, it's our charge to equip and empower students to live engaged, authentic lives and be responsible citizens. Each student has to define each of those things for him or herself. We can't do that if we exclude some part of the population. We must be a safe place for those who come to us."

We all know that our communities—at our colleges and universities and beyond—are made up of people with a variety of gender identities, sexual orientations, and ways of being in the world. Yet as far as anyone knows, George Benson is the first College of Charleston president ever to announce this, and to publicly support the LGBTQ population at the school. Indeed, right before I got hired at CofC state representative John Graham criticized the College for considering a minor in LGBT Studies.  Former CofC president Leo Higdon shut the conversations down. He announced "We cannot support a proposal for a minor in gay and lesbian studies because it is not, for a number of reasons, in the overall best interest of the college."

I suspect that Tom Moore is the first at USC-Upstate, too.

To contradict legislators’ pressure was probably a challenging and potentially damaging stance for President Benson and Chancellor Moore to take, but of course it was the right stance. It was obviously the right stance for anyone committed to human rights. The fact that February 2014 was the first time that any president of the College has said this kind of statement, and April 2014 for USC-Upstate, is stunning.

We all know that South Carolina is full of frighteningly homophobic state legislators. The evidence is overwhelming, and they’re not trying to hide it: they’re proud of it. It’s the job of our academic institutions to make space for a diverse community and to offer a variety of performances, texts, and conversations. USC-Upstate has caved in terms of programming they’re offering, but perhaps they’re trying to climb out, to be a school that isn’t ridiculed by the national media for their fear of standing up for all their students, faculty, and staff.
Posted by Alison Piepmeier at 10:16 PM 4 comments:

I've been really political lately, and it's both important and exhausting.  Like, really exhausting.  So I'm going to take a little space here to be personal--and by this I mean truly personal, not "the personal is political" personal.

Let's see if I can do that.


I've begun recognizing that entire weekends alone with Maybelle don't work well for me.  Or for Maybelle.  I can do all kinds of interesting, stimulating stuff with Maybelle, but if I'm alone doing it, I feel...bored?  Tired?  Fearful that I'm not capable of being a single parent?  All of the above.  I need friends to be with me.

So I'm experimenting with more weekend planning.  Saturday was excellent!  Conseula and her kids came over, took me grocery shopping, and then we all went to Hampton Park to feed the ducks.  Conseula managed to hide her fear of the ducks quite convincingly.

Then a little later in the day Uncle Trey took us to the ocean.  I quickly learned that I can't mention a beach trip to Maybelle until the very second we're leaving, because when I told her at 2:00 that Uncle Trey was getting us in 30 minutes, she walked out the door.

"Ocean!  Ocean!"  She couldn't hide her outrage when I told her Uncle Trey wasn't here yet.

When we got back from our ocean time, she and I were both worn out--like, sitting on the couch guzzling out of water bottles, staring at the tv worn out.  But we both rallied after we ate a bit.  And by "rallied," I mean that she didn't fall asleep while I was giving her a bath.  She managed to let me get her pajamas on her first.

It was a full day, and helped me feel that I might be able to transition successfully into this new phase of my life.
Posted by Alison Piepmeier at 5:04 PM 5 comments: